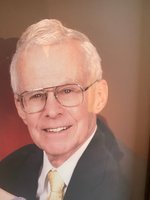 Dr. Justin Ward Diehl (Gus) St. Bonaventure Emeritus Professor “Focus on the things that cannot be taken away from you: your faith, your education, and your health.” This was consistent advice that Gus often gave his nine children. He believed they should sit in the front row at Mass, take the hardest teachers, and learn life sports. Dr. Justin Diehl, known affectionately as Gus, died peacefully on July 24, 2021. He was 92 years young. He was known as a husband, father, teacher, coach, friend, and athlete. He was born on May 3, 1929, in New York City, the son of the late Gladys Ward and John F. Diehl. He married Rita Marie Crotty on January 9, 1954, and they shared 66 years of marriage. Gus grew up in the World War II era. Underaged, he tried to enlist, but his father would not sign for him. Instead, Gus’s father convinced him his talent was his brain, and he could best serve the country as a scientist. Gus graduated from Xavier University in Ohio in 1951 majoring in Chemistry and Mathematics. He followed that with a Master’s Degree in Organic Chemistry from Iowa State in 1953. In 1954 he entered the Army and served during the Korean War. After the war, in 1956, Gus returned to Iowa State and completed his PhD in Heterocyclic and Chemical Engineering. In 1959, he accepted a position with the Chemistry Department at St. Bonaventure University, retiring with Emeritus status in 2000. During his years at St. Bonaventure, he was chairman of the Chemistry Department for 17 years and published numerous papers; plus, people often referred to him as “Molecule Man.” As his children grew, Gus was their baseball coach, swim coach, and organizer of games between them, including the long running “Big Guys vs. Little Guys” events. As they grew, he was always there to support them. When his eldest daughter Mary entered St. Bonas, he started the University’s Women Swim Team in 1971. He coached the first four years, without any scholarship swimmers, yet compiled a winning record of 33-11-1. A dedicated sportsman, Gus played golf, tennis, jogged, and even biked to and from work most of the year on his bike “Pee-Wee.” His favorite sport was swimming, and he was even ranked 2nd in the U.S. and in the top 10 in the world for almost a decade as a Master’s swimmer. Even in his 80’s, Gus and his wife Rita would be seen almost daily working out at the Olean YMCA. One of his favorite sayings during this time was “Use it or lose it.” Rita passed last year, and Gus was heavily involved in bringing his large family back to Olean last month for a memorial mass for her. He was so pleased to see everyone. He is survived by six sons: John (Betty), Thomas (Gloria), James (Robin), William (Annette), Robert (Rachel), and David (Gwen); and three daughters: Mary (Larry Long), Kathryn (Mathew Bliven), and Theresa (Kevin Kobylinski). Gus also leaves 21 grandchildren: Jeffrey and Kelly Long; Felicia Diehl; Patrick, Emmanuel, Dameyettia, and Casey Diehl; Joseph and Gina Diehl; Rachel, Daniel, and Michael Diehl; Thomas, Alyssa and Andrew Diehl; Emily and Karl Bliven; Justin and Ashlyn Diehl; Calvin and Zosia Kobylinski, as well as 4 great grandchildren: Audrey, Elizabeth, Tristan, and Avery. To celebrate his life, a memorial mass will be held at the St. Bonaventure University Chapel at a future date. Memorials, if desired, may be made to the Olean YMCA, 1101 Wayne St., Olean, NY 14760. Funeral arrangements are under the direction of the Casey, Halwig and Hartle Funeral Home, Olean.