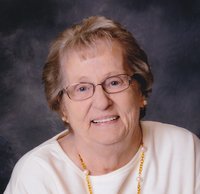 Carol Rourke Weinhold Olean, NY Carol Anne Rourke Weinhold passed away on Wednesday, May 26, 2021 at the Pines Nursing Home in Olean, NY after a period of declining health. She was born in Madrid, NY on December 12, 1935 to Glenn and Mertie (Griffis) Rourke. Carol graduated from Madrid High School in 1953 and attended Watertown School of Business. On November 19, 1955, she married John R. Weinhold, son of Charles and Carrie (Parker) Weinhold, at the Madrid Methodist Church. Carol was a proud Navy wife and she and John lived in North Kingstown, RI; Brunswick, ME, Mechanicsburg; PA; and Jacksonville, FL before returning to Madrid when John retired from the Navy in 1967. Carol was a homemaker, Board of Elections volunteer, census taker, and eventually worked for many years at the St Lawrence County Printing Department. After being widowed, she was active in the Daughters of the Nile and traveled throughout the country attending conventions and programs in support of Shriners Hospitals for Children. She later moved to Glens Falls and then Olean, NY. She is survived by two sons, John R. Weinhold, his wife, Diane Trippany, Clifton Park, NY, and Eric W. Weinhold, Franklin, MA; two grandsons, John L. Weinhold and Victoria (Chiaravalle), Saratoga Springs, NY, and their daughters Isabella and Olivia, and Eric J. Weinhold and his fiance Michelle Hutchins, Clifton Park, NY; two sisters-in law, Ida Mae Weinhold and Theresa (James) Weinhold; nieces and nephews; many cousins and friends; and Rui dos Santos, her Brazilian exchange son. She was predeceased by her husband, John, in 1991; her parents; brothers Glenn, who died in the Pacific during WWII, David, William, and Kenneth; and a sister, Sylvia. A funeral service will be held at Foxwood Mausoleum and Memorial Park, Ogdensburg, NY on Saturday, June 12, 2021 at 2:00pm. The family will receive family and friends from 1:00pm to 1:45pm. In lieu of flowers, memorial donations may be made to Southern Tier Wounded Warrior, c/o Dr. John P. Miller, 2646 W State St, Suite 400, Olean, NY 14760.