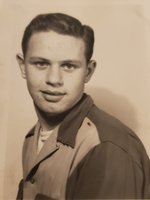 Olean NY James L. Outman, Jr., 80, passed away Friday (May 28, 2021) at Olean General Hospital after a lengthy illness and will be reunited in heaven with his loved ones. Born August 31, 1940 in Olean, he was the son of James L. and Helen E. (Hee) Outman, Sr. Mr. Outman graduated from Olean High School. In 1959 he enlisted in the United States Marine Corp. where he served until 1963 as a Radio/Morse Code Operator. He retired as a machinist for Dresser-Rand in Olean and Wellsville after 45 years. In his free time, he enjoyed everything related to the Marine Corps, woodworking, hunting, fishing, genealogy, collecting baseball cards, golf, American history, trivia and watching all sports, especially the St. Bonaventure Bonnies. He was a member of the Angelica Fire Department, local VFW’s, and the American Legion. He is survived by his former wife, Carol Richmond Outman of Portville; 3 children James (Julie) Outman III of Owego, Tina (Doug) Jenks of Central Square, and David Outman of Portville; 6 grandchildren Paul (Nikki) Leonard of Peru, NY. , Christopher (Sierra Stapley) Leonard of Colorado Springs, CO, Ethan (Dani) Leonard of Baldwinsville, NY. Matthew, David, and Emily Outman, all of Owego, NY; 2 brothers Vernon Outman of Springville and Joseph (Kathy) Outman of Baltimore, MD; Star (Jeff) Flint whom he thought of as a daughter of Olean and her son Kyle Irvin whom he helped raise and several nieces and nephews. He was predeceased by his parents and companion Debbie Irvin, and 7 siblings Anthony Outman, Ronald Outman, Robert Outman, Claire Ide, Garold Outman, Richard Outman, and Christopher Outman. At Mr. Outmans, request no funeral services will be held. Arrangements under the direction of the Casey, Halwig, and Hartle Funeral Home Olean, NY. Memorials if desired should be made to the “Tunnel to Towers Foundation”, 2361 Hylan Boulevard, Staten Island, NY 10306, www.t2t.org. Online condolences may be expressed at oleanfuneralhome.com.