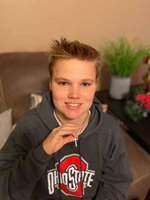 Alvin J. "AJ" Glover Hilliard, OH Alvin Joseph "AJ" Glover, age 15, died on Saturday (April 3, 2021) in Columbus, OH. AJ was born on October 20, 2005 in Columbus, and was the son of Alvin Michael and Suzanne Connerty Glover. He was a freshman at Hilliard (OH) Davidson High School where he was involved in many activities such as baseball, swimming, and football. He also played the French horn in band, was on the student council, and was a friend to many. AJ was currently an Assistant Senior Patrol Leader and Troop Chaplain for his local Boy Scout Troup. He reached the rank of Life Scout and was working toward earning his Eagle rank. He was a member of Cypress Dublin Wesleyan Church where he taught 3rd and 4th graders in Kids Ministry and was also active in his youth group, United. AJ is survived by his parents of Hilliard; his two sisters Kayla Daberkow and Lily Glover; his paternal grandmother, Patricia Glover of New Matamoras, OH and many aunts, uncles and cousins. AJ was preceded in death by his paternal grandfather, Alvin S. Glover and maternal grandparents, Frank Connerty and Nancy Connerty Banios. The family held visitation and a Celebration of Life Service in Galloway, OH. Private interment will be in St. Bonaventure Cemetery, Allegany. In lieu of flowers, contributions may be made to the Youth Ministry at Cypress Dublin Church, 7055 Avery Road, Dublin, OH 43017. Local arrangements are under the direction of the Casey, Halwig & Hartle Funeral Home, Olean.