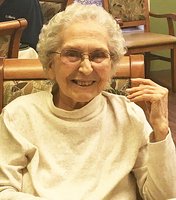 Donna Raye Shirey Olean, NY Donna Raye Shirey, a resident of Eden Heights in recent years, passed away Tuesday (February 2, 2021) at the Cuba Memorial Hospital. Born July 27, 1923 in Westons Mills, she was the daughter of John and Dolores White Manley. On September 7, 1943 in Olean she married Emmett L. Shirey who predeceased her May 12, 2011. Donna Raye first attended school in a 2-room schoolhouse in Westons Mills, later graduating from Olean High School at the age of 16. In her formative years, she developed an organizational and secretarial skill-set which led her to a career as a legal secretary. She worked over 50 years, the first 40 of which were for Bernard Gill's law office in Olean. After his retirement she continued working for 10 years for DiCerbo and Palumbo law office. She was very proud that during her last 2 years of work, she attained the position of paralegal. She was a beloved wife, and also an attentive mother to her two daughters, always available to them for any school-related activity. Even as a working mother, she guided them to adulthood by instilling in them her firm belief in keeping busy and always being helpful and kind to others. She enjoyed ceramics, crocheting, and other crafts. Often she would create piles of baby blankets, hats and mittens for charitable giving such as for Christ United Methodist Church and other local organizations. Along with her husband, she took special pride in improving and maintaining her home over the years. She will be remembered as being devoted to her husband, her daughters, her many dogs over the years, and for her beautiful flower gardens. She leaves behind 2 daughters Rev. Carol (Robert) Thayer of Olean and Michelle (Patrick) Crean of Benton Harbor, MI; 3 granddaughters Laurie Firth, Thomas (Elizabeth) Thayer and Robyne (Kenneth) Hadden; 7 great-grandchildren; 6 great-great-grandchildren and many nieces and nephews. In addition to her husband she was predeceased by a sister Patricia Yehl and a brother Donald Manley. No services are being planned at this time. A memorial gathering will take place at a later date and will be announced. Burial, along with her husband, will be in Mt. View Cemetery, Veterans Field of Honor in Olean. Memorials, if desired, may be made to the Cattaraugus County SPCA, 2944 Route 16N, Olean, NY 14760 or to the Chautauqua Blind Association, 510 W. 5th St., Jamestown, NY 14701. Please also honor her memory by extending a kindness to someone and, in doing so, give a thought to Donna Raye. Arrangements are under the direction of the Casey, Halwig & Hartle Funeral Home, Olean. Online condolences may be expressed at oleanfuneralhome.com.