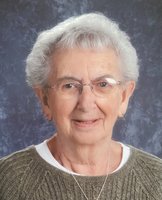 Janet L. Luzzi Olean, NY Janet L. Luzzi, 88, of 137 1/2 N. 15th St., passed away Saturday (January 2, 2020) in her home, surrounded by her family. Born May 27, 1932 in Olean, she was the daughter of Albert and Thelma Schnettler Stier. On April 24, 1954 at St. Mary of the Angels Church in Olean she married Dominic P. Luzzi, Jr. who predeceased her June 25, 1997. Janet was a 1950 graduate of Olean High School. She worked at the former Hi-Q and also for the former Acme Electric Co. She was primarily a homemaker and enjoyed raising her 2 daughters. Later she worked as a teacher's aid for BOCES at the Boardmanville school location until her retirement. She was a longtime member of the Basilica of St. Mary of the Angels. She enjoyed socializing with her family and friends and played euchre. She also participated in the activities at the Olean Senior Center such as parties and bus trips and she was part of the Coasters. She is survived by her 2 daughters Denise (Joe) Stomieroski and Terri Lynn Luzzi, both of Olean; 2 grandsons Jason Stomieroski of Las Vegas, NV and Eric (Kelli) Stomieroski of W. Henrietta; 1 great grandson Grayson; a sister-in-law Linda Stier of Apex, NC; 2 brothers-in-law Fr. Salvatore Luzzi and Louis (Jane) Luzzi, both of Bradford, PA, several nieces and nephews and a cousin Chris (Chuck) Hackett of Allegany. In addition to her husband, she was predeceased by a brother Howard Stier in 2018. The family will be present to receive friends on Wednesday (January 6, 2020) from 9:30am to 10:30am at the Basilica of St. Mary of the Angels. A Mass of Christian Burial will immediately follow at 10:30am in the church. Rev. John Adams, pastor, will be the celebrant. Burial will follow in St. Bonaventure Cemetery. Memorials, if desired, may be made to Homecare and Hospice, 1225 W. State St., Olean, NY 4760 or to the Pink Pumpkin Project, 2319 Valley View Dr, Allegany, NY 14706. Arrangements are under the direction of the Casey, Halwig & Hartle Funeral Home, Olean.