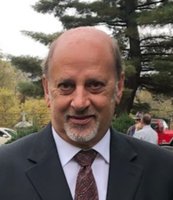 John Clair Caldwell "Loving husband, father and grandfather" Portville, NY John Clair Caldwell passed away unexpectedly Wednesday (October 14, 2020) at his home. Born on September 1, 1954 in Wellsville, he was the son of the late Robert C. and Marian Zangare Caldwell, Jr. On June 26, 1999 at St. Bonaventure Parish in Allegany, he married Pamela J. Grego, who survives. John was a graduate of Wellsville High School, class of 1972. He graduated from Alfred State College in 1974 with a degree in Engineering. He worked at the Air Preheater in Wellsville for 1 year, then went to work at AVX Ceramics (Olean Advanced Products) in 1976. He worked for 2 years at Dresser Rand, and then returned to AVX and worked proudly as a principal engineering, environmental, safety, security and facilities specialist until the business closed on September 30th of this year. He also worked as manager of the company's machine shop, for a total career with them of 42 years. Even after AVX closed, John was helping out as the building was recently being torn down. John was one of the founding members of the Custom Express Car Club in Wellsville, where he helped raise money for charities for 20 years, and he owned a 1967 Chevrolet Chevelle. He was an avid NASCAR fan and his favorite racers were Dale Earnhardt, Sr. and Jr. He enjoyed going to Watkins Glen, McKean County and Little Valley raceways with his son Chris. He was also a devoted Buffalo Bills fan. He loved his family and especially his 5 grandchildren, Chase Caldwell of Portville, Marchele Day and Obidah Ramadhan, Jr., both of Kentucky, and James Wolf and Natalie Wolf, both of Allegany. In addition to his loving grandchildren, he is survived by his wife Pamela; 2 sons Chad (Kristin) Caldwell of Portville and Christopher Caldwell of Portville; his stepson Anthony (Connie) Wolf of Allegany; his stepdaughter Michele (Obi) Ramadhan of Kentucky; his brother Robert C. (Lorraine) Caldwell, III of Wellsville; his niece Tami (Jim) McCarthy of North Hornell; his nephew Rob (Nicole) Caldwell of Wellsville; multiple great nieces, nephews and several cousins. He was predeceased by his parents, and several aunts and uncles. Friends will be received on Sunday from 4-7pm at the Casey, Halwig & Hartle Funeral Home, 3128 W. State Rd., Olean. Funeral services will be held Monday (October 19, 2020) beginning with a prayer service at 9:30am in the funeral home. A Mass of Christian Burial will follow at 10am at the Basilica of St. Mary of the Angels. Burial will be in St. Bonaventure Cemetery. In lieu of flowers, donations may be made to a charity of the donor's choice. Online condolences may be expressed at oleanfuneralhome.com.