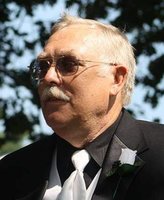 Stanley D. Gunsolus Olean, NY Stanley D. Gunsolus, 69, of 220 N. 15th St., passed away Thursday (October 1, 2020) at the Olean General Hospital, surrounded by his children, after a brief illness. Born January 29, 1951 in Olean, he was the son of Walter L. and Ethel Schnell Gunsolus. On October 31, 1975 in Olean, he married Linda Moyer who predeceased him December 17, 2011. Stanley was a 1969 graduate of Allegany Central School and began working for Kodak Co. in Rochester. For 36 years he was employed by AVX Ceramics, later Olean Advanced Products, until his retirement in May of 2014. He was always active in the outdoors and was skilled at archery. He shot archery in league play in both Belmont and at the Circle-K Archery Club in Salamanca and was also an archery instructor for the Boy Scouts. He enjoyed dirt track racing, and watching his children and grandchildren playing sports and colorguard. Stanley played softball in Olean's Industrial League, and along with his wife Linda, enjoyed both league bowling and playing cards. He was an avid Sabres, Buffalo Bills and NASCAR fan. Surviving are 3 children Doug (Kristina) Gunsolus of Eldred, PA, Stacy Gunsolus Cooper of Hinsdale and Jason (Chikita Gibbons) Gunsolus of Olean; 12 grandchildren; 9 great grandchildren; 3 brothers Paul Gunsolus of Cuba, Donald Gunsolus of Franklinville and David Gunsolus of Olean; a sister Susan Smith of Randolph and several nieces and nephews. His grandchildren were the apple of his eye and he was looking forward to the upcoming birth of 2 more. In addition to his wife Linda, he was predeceased by his parents. Friends will be received on Monday from 1-3 and 5-7pm at the Casey, Halwig & Hartle Funeral Home, 3128 W. State Rd. Olean. Funeral services will be held Tuesday (October 5, 2020) at 11am in the funeral home. Rev. Doug Travis, pastor of Harvest Field Ministries, will officiate. Burial will follow in Allegany Cemetery. The use of a mask will be required while attending the visitation or funeral. Memorials, if desired, may be made to Roswell Park Cancer Institute, 665 Elm St, Buffalo, NY 14203, or to the American Heart Association of WNY, 5488 Sheridan Dr #300, Williamsville, NY 14221. Online condolences may be expressed at oleanfuneralhome.com.