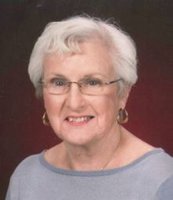 Rita Marie Diehl "Wife/Mother/Nurse" Olean, NY “Don’t forget to say your prayers!” This was a common phrase expressed by Rita Marie Diehl at the end of any conversation with one of her nine children. Her deep Catholic faith is one of her many traits that will be remembered as she died peacefully on August 28th, 2020 at The Pines Healthcare and Rehabilitation Center in Olean. She was 91 years young. Born on March 1, 1929, in New York City, Rita was the youngest daughter of Cecilia Narborough and Cornelius Patrick Crotty. She was married to Justin “Gus” Diehl on January 9th, 1954, and they shared 66 years of marriage. A 1947 graduate of St. Agnes High School on Long Island, she attended the College of Mount Saint Joseph in Cincinnati, Ohio, until 1949. She then attended the St. Vincent’s School of Nursing in New York City, where she received her RN certification in 1952. Afterwards, she worked as a nurse for the National Health Services on a Navajo reservation in Arizona. Rita returned to Mount Saint Joseph and graduated in 1953 with a Bachelor of Science degree, majoring in Nursing. While in college, Rita was a noted sportswoman. She was an accomplished equestrian and served as captain of the school’s field hockey team. She was recognized by her class with the outstanding Athlete of the School award in 1953. After graduation, she worked as a floor nurse for the Wilmington Hospital in Delaware for one year before joining her new husband in the Army in Southern France, where they traveled all over Europe for nearly two years. While juggling the logistics and complexities of raising nine children, Rita went to night school and earned her Master’s Degree in Administration from St. Bonaventure University in 1973. In the mid-70’s, Rita was hired by BOCES as a clinical nursing instructor. In 1976, Rita became the school’s LPN Coordinator for Cattaraugus, Wyoming & Erie Counties. Rita will be remembered as someone “God blessed–nine times”. Rita was pleased with her healthy, active nine children and the fact that all of them graduated from college, and all six sons served in the active military services. She was a mother that encouraged her children to get into the game of life, do their best, but not take it too seriously. She lived her life with style, humor, and a continuous sense of adventure. In her forties, she became a certified pilot and also took up the art of belly dancing. Even into her late sixties, she was willing to jump off ocean cliffs and speeding ski boats. She made trips into the woods with her sons to experience first-hand the challenges of deer and turkey hunting. Rita was the ideal complement to her husband, Gus. They played duplicate bridge, competitive swam for the Jamestown Master’s swim team, golfed, ice skated, skied, and traveled their way around the world together. For two separate six-month periods, they lived in Puerto Rico and New Zealand, bringing along their children who attended the local schools. In everyday life, Rita drove fast/Gus drove slow; she liked to stay up late socializing/he liked to get up early; she liked to celebrate/he liked to compete: God blessed them with a love that continually grew. In addition to her husband, Justin, Rita is survived by six sons: John (Betty), Thomas (Gloria), James (Robin), William (Annette), Robert (Rachel), and David (Gwen); and three daughters: Mary (Larry Long), Kathryn (Mathew Bliven), and Theresa (Kevin Kobylinski). She also leaves 21 grandchildren: Jeffrey and Kelly Long; Felicia Diehl; Patrick, Emmanuel, Damyetta, and Casey Diehl; Joseph and Gina Diehl; Rachel, Daniel and Michael Diehl; Thomas, Alyssa and Andrew Diehl; Emily and Karl Bliven; Justin and Ashlyn Diehl; Calvin and Zosia Kobylinski, as well as 4 great grandchildren: Audrey, Elizabeth, Tristan, and Avery. Rita was predeceased by her sister, Mary Gore, and three brothers, Joseph, James, and William Crotty. A rosary will be said to commemorate her Catholic commitment. To celebrate her life, a life that was filled with love for her family, faith, and friends. a memorial mass will be held at the St. Bonaventure University Chapel at a future date. Memorials, if desired, may be made to the Alzheimer's Association, WNY Chapter, 6215 Sheridan Dr., Amherst, NY 14221. Funeral arrangements are under the direction of the Casey, Halwig and Hartle Funeral Home, Olean.