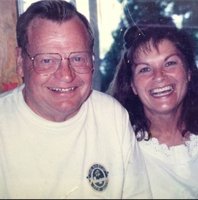 “Loving Husband and Father” Olean- James P. Van Dixon passed away peacefully Saturday (January 18,2020) at his home. Born on July 23, 1935 in Olean he was the son of Donald and Anna Wood Van Dixon. On February 12, 1994 in Olean he married Linda Grantier who predeceased him January 4, 2016. Mr. Van Dixon was a 1953 graduate of Allegany High School. He was drafted into the United States Army and served from 1958 to 1960 while stationed in Germany. He then went on to work for UPS where he retired in 1994 after 27 years. He was a 4th degree knight for the Knights of Columbus. After his retirement he went on to fulfill his dream and lived on Lake Gaston in North Carolina. He enjoyed being outdoors, being on the lake, fishing, telling stories, going to The Burton and most importantly, being with his family. Although he will be greatly missed, he is exactly where he wants to be, with his beloved Linda. Surviving are 5 children Karen (Bruce) Van Dixon Peterson, Tina Van Dixon Hamilton, Kim (Scott) Van Dixon Odle, Niki Van Dixon Moronta and Don Van Dixon; 5 grandchildren Brittni Swetland, JR Moronta, Kori (Taylor) Hamilton Page, Katie Hamilton and Daniel Hamilton; 2 great grandchildren Joey Monachino and Vinny Monachino; 3 step sons Robert Cenni, Joseph Cenni, and John Cenni and several nieces and nephews. He was predeceased by 2 brothers Theodore and Marvin Van Dixon and one sister Donna Macauley. At Mr. Van Dixon’s request, his body has been donated to the University of Buffalo Medical School. A celebration of his life will be held at a later date. Memorials if desired may be made to the American Cancer Society. Online condolences may be expressed at oleanfuneralhome.com